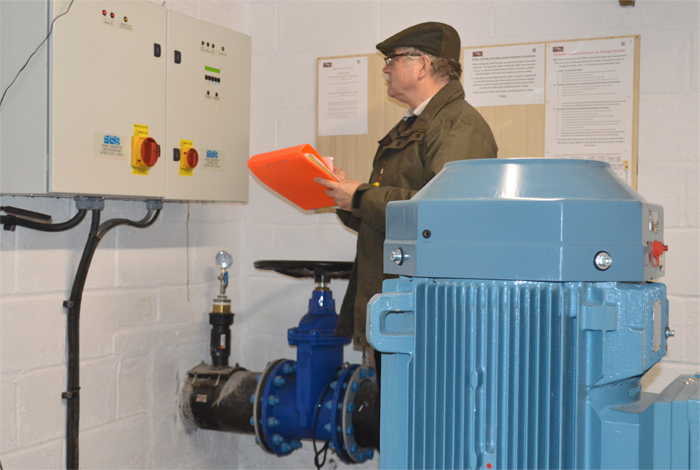 The generation total at Blaen Dyar (MH-2) at the end of December was 11,000 kWhs. This scheme developed a fault with the spear valve/actuator unit before Christmas and so the turbine manufacturer visited the site and fitted a new actuator under the warranty.

We have been submitting the final data and files for Blaen Dyar to OFGEM for the conversion of our initial FITs application to full permission and we hope to have this granted soon, so that we can start receiving FITs payments.

In mid October, the scheme had a lot of flow and was generating well.

There was a small amount of generation this month. We have completed the snagging and other issues at this site and the official hand-over took place with some instruction from TGV Hydro.

Blaen Dyar was up and running for the first time on Friday 11th August 2017, which is the official commissioning date. In the first couple of days there was just enough water to start the turbines turning before the water level dropped again.

Construction is nearing completion. The regional electricity operator Western Power has carried out their major works and we are now waiting for EoN to change the meter from single to split phase and reposition it in the new kiosk. The turbine house is almost complete and we are arranging a date for final testing of the scheme.

The penstock has been fully joined and dragged into position, the impoundment and intake area is mostly complete, the main turbine house structure has been built, and the main electrical work has been carried out.

The intake concrete has been poured, the penstock pipes have been butt-welded and dragged into position in lengths of about 100m and work has started on the turbine house.

We are expecting the delivery of penstock pipe and other materials. The fallen tree has been removed and the dry weather should enable the construction team to make good progress this month.

The construction company building Blaen Dyar has had a team working to clear the penstock route of undergrowth and dumped items, including a large mass of steel wire which was lying across the route of the penstock pipe and required four man days to remove with an angle grinder and bolt cutters. Progress has also been delayed slightly by a fallen tree around the intake point, which was straddling the stream and partly blocking a public footpath.

The construction phase has just begun. The site is near Llanelli Hill, above the Clydach Gorge just outside Abergavenny. This scheme is likely to take about 5 months to complete and so should be operational by the middle of this year.

We are delighted to welcome Leona Jones and Penny Hallas as HYDRO artists in residence. Both explore themes of energy, industry and the environment in their artworks and the initial research phase of their work will be to follow installation at Blaen Dyar.